I love watching competition shows on Food Network such as Iron Chef America or Chopped, but I will occassionally watch a cooking show as well. I caught an episode of Healthy Appetite with Ellie Krieger a couple weeks ago and she featured a chicken pepian recipe that I just had to try. Uncharacteristically though, I only switched up a few things and essentially stuck to the recipe. Boy was that sauce delicious and so flavorful – slightly tangy from the tomatillos and brightened up by the lime! I served this dish with a side of brown rice and pinto beans to round out the meal.

I cut the original recipe in half and still had leftover sauce, which made for a quick lunch served over roasted veggies and rice sprinkled with cojita cheese the following day. This pepian sauce could also be used in enchiladas, tacos or spooned over tilapia or a mild white fish. 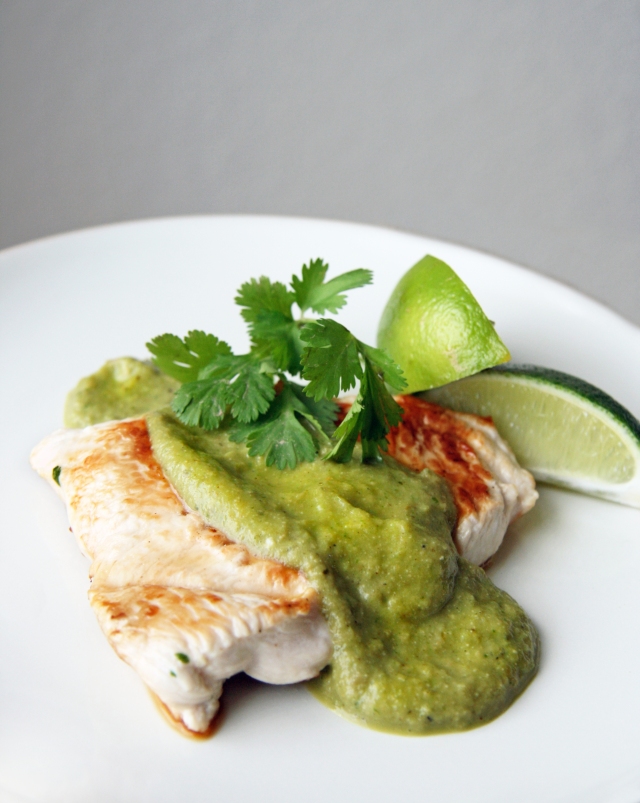 1. Preheat the broiler. Remove papery outer layer from tomatillos, rinse them in warm water to remove some of their natural stickiness then dry off and cut into quarters. Toss tomatillos and poblano or pasilla pepper with  1 tsp of the oil, place on a baking sheet and broil until charred, about 10 minutes.
2. Heat a large saute pan, heat 1 tsp oil over medium heat. Add onions and cook until soft and translucent, (about 5 minutes) and then add garlic and cook for 1 minute more.
3. Place tomatillos, poblano, onion/garlic mixture, cilantro, chicken broth, jalapeno, toasted almonds and spices and salt in a blender. Blend on high until completely smooth, about 30 seconds.
4. Heat the remaining teaspoon of oil in skillet and cook the chicken until browned on both sides and nearly cooked through, about 5 minutes per side.
5. Add sauce from blender to the skillet, covering chicken then bring to a simmer and cook an additional 3 to 5 minutes, until chicken is cooked through. Serve chicken topped with sauce and garnished with cilantro and lime wedges.

Recipes Notes: I used ground spices instead of toasting and grinding my own like Ellie to save on time but feel free to use whole peppercorns, allspice and cumin seeds and add to the blender.

Health Tidbit: According to Ellie, this recipe is an excellent source of protein, niacin, vitamin B6, C and K, iron, phosphorus, potassium and selenium.

One thought on “Chicken with Pepian Sauce”